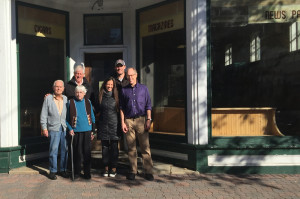 Frank and Ann Lackey, with William Raveis Stowe Realty’s Ken Libby, congratulate Graham and Christina Mink and Richard and Nancy Bennum (not pictured) as the new owners of the iconic Lackey’s Variety Store building at 109 Main Street, Stowe. The sale was finalized October 15.

For six decades, Lackey’s was a consistent figure on Main Street, a favorite stop for local children and visitors, selling candies, postcards, books and other sundries.

At the closing, Frank Lackey said that he is pleased to see the building will be restored to nearly its original configuration and will again be an anchor in Stowe.

The new owners have already started retrofitting the 7,900+/- sq. ft. space and look forward to having retail back in the building as quickly as possible.

(This article also appeared in the Stowe Reporter.)